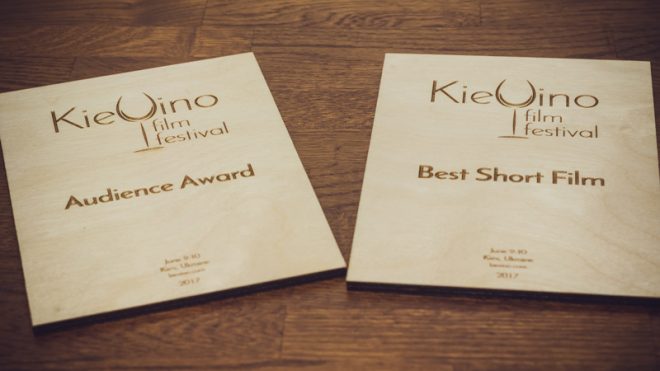 It is in the historic centre of Kiev in Art Gallery Art Prichal just at the Dnieper riverside on June 10th the organisers of KieVino Film Festival welcomed guests and held a very unusual film event, organised by La Gata Productions and partners.

More than 50 filmmakers joined to watch and discuss seven short films that were selected to the Official Competition. Before screening, every film was presented either by director if he was present, or by selection committe, and just after the screening of each film film critics and filmmakers discussed the films together with hosts Lara and Eugene Mazur with a strict timer.

Films evoked different reactions, which sometimes turned into heated discussions. Every film amazed in its own way, and in the end all the filmmakers voted for the Best Short Film, and the winner became Swiss film Scrabble directed by Cristian Sulser and produced by Bjoern Haertel.
The day before the main festival event on June 9th KieVino Film Festival screened films for all the audience in open-air cinema Park Cinema Kiev in park Natalka. More than 300 viewers watched the film and made their choice.

The voting was held by the journalists of student TV “TA Mohylianka” and head of Student Council of Mohyla Academy Dmytro Kharchenko. It was a surprise for everyone that film Srabble won Audience Award as well.

Film critic and Program Director of KieVino Film Festival has shared his views after the Award Ceremony: “This rare unanimity of filmmakers and unprofessional viewers proves that Cristian Sulser was able to connect the apprehensibility and precision with refinement, weave together the tragic and the funny, make the drama of his characters clear and close to each viewer”.

Two Ukrainian films were awarded as well by the partners of the Festival.

Short film Medea directed by Nickolay Zaseev and produced by Oleskiy Gladushevsky got a Certificate from Letter To Fest Discribution for sending 20 films to International festivals. “We chose among Ukrainian Films, and there were only 4 in Competition. Film Medea was almost shown nowhere. It has a peculiar story that can be interesting for the festivals”, commented Maryna and Oksana Artemenko, the founders of Letter To Fest.

Art Cafe “SH.O.?!” prepared a romantic dinner for two for the second lace of Audience Award, and it was received by film Fridge directed by Maxim Sukharev and produced by Maryna Traskovska. “It is an interesting topic about reality of life, all the problem of 21st century is shown there”, commented Mykola Ovselyan, director of Art Cafe “SH.O.?!”

Partners of the Festival: